OK one HUGE caveat here. Do not under any circumstances try this if the recipient of your foot advances is rude, smelly or wearing spiky shoes. Cool?

Just to be clear I am not implying that sexual innuendos are to be used as a persuasion tool but that this study tells us that people love secrets and even the simplest things can become exciting if only positioned as a secret between two people.

Daniel Wegner and his colleges asked participants to engage in a little footsie under the table with a stranger in the presence of another couple. People who’d been keeping their footsie secret were significantly more attracted to each other than those who were doing it openly.

People obsess over secrets way more than things that are well-known to others. They also value secrets as a binder that beings two human beings closer together.

The Hook and the Tweak:

Get into the habit of telling secrets to people you want to influence. Even simple things when said with a tone of confidentiality can give the illusion of being closer and part of a tight inner circle. Some ideas for your secretive pleasure:

1. Next time when you are presenting to a group and feel the attention of the audience wandering, drop your voice two decibels lower and say something “off-record” in your best conspiratory whisper (imagine gossiping about your archenemy’s botched botox or your neighbor’s secret love nest).

2. In your next newsletter email, instead of saying “I have some interesting things lined up for you next month” say something like “since you are my special person, let me tell you a secret…..”. You both know the secret is being shared with plenty other people but that is not going to take away the warm glow that comes from being the bearer of a sacred + secret trust. Never forget, we humans = completely irrational.

3. Another creative way to harness the power of secrets is to use it in your thank you copy once a person signs up. So instead of saying “thank you for signing up”, come up with something personal and classified e.g. “my 5 awkward personality quirks few people know” or “2 devastatingly embarrassing (and highly classified) childhood bloopers that have made me a better writer” and say it in the thank you copy in a way that implies that you two share a secret that the rest of the internet doesn’t know.

That’s it for today. See that was easy and didn’t involve you having to make or fight off unnecessary advances.
If you have ever played footise or used any of the tweaks here, drop me a line and let me know your experience at hey@thepersuasionrevolution.com 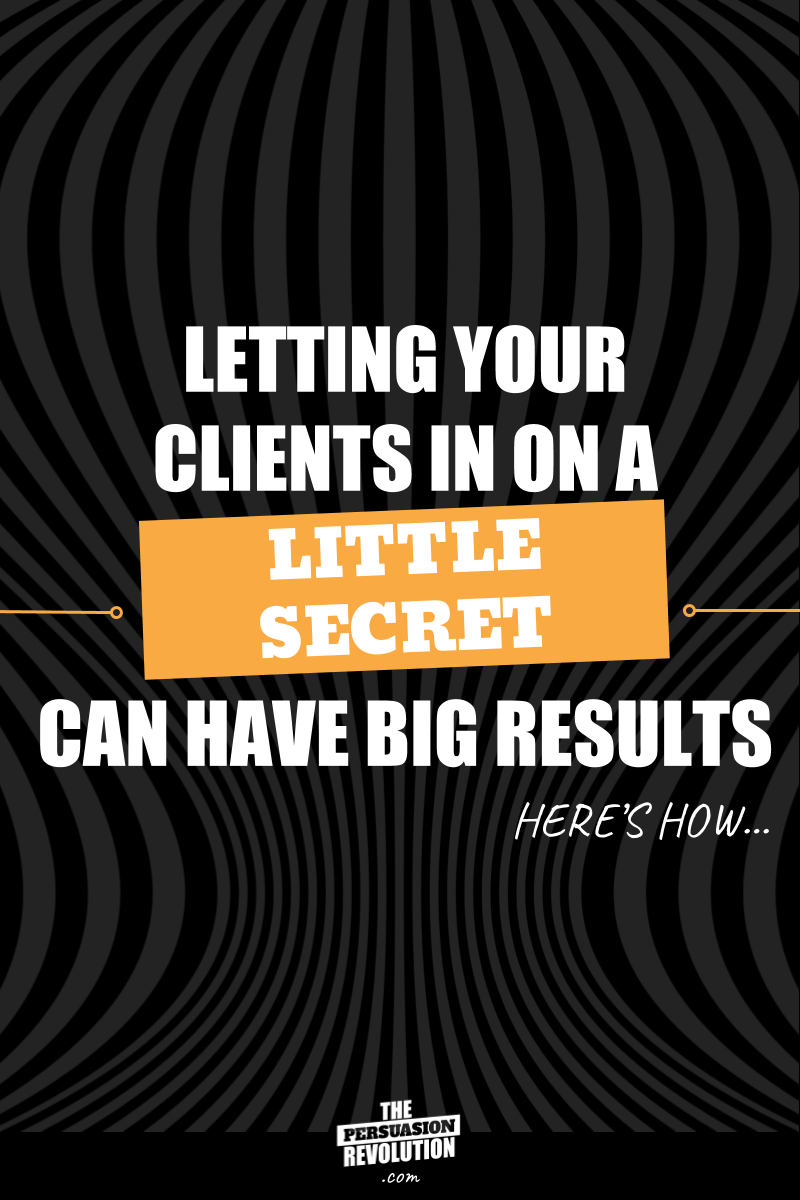 3 Psychological Tricks to Price your Products So they seem like a Bloody Steal! →